In the last entry, I have given you a brief outline of the five pillars supporting Supply Chain 3.0. Let’s now talk about the first two. The first is termed Fire-Aim-Ready (FAR) Innovation. Clearly, it is about creating new (better) products and services, as well as new (better) ways of configuring and delivering existing products and services. Many in supply chain – especially those from logistics or procurement – wonder what do they have to do with innovation. This mindset of not-invented-here survives from the days of materials handling (pre-supply chain days, or Supply Chain 0.0 days)  in many quarters and gives supply chain a bad name when it manifests itself. But let me ask them this – How did Apple create and launch products in nearly half the time it took its rivals while keeping utmost secrecy about the product features? The answer will give a clue to how important it is to choose the right suppliers and create the right supply chain arrangements that elevate the supply chain to lofty heights. Apple is only the most visible example, there are many more in the book 5-Star Business Network. Looking at the entire dataset, here is how the companies stack up on Fire-Aim-Ready Innovation. 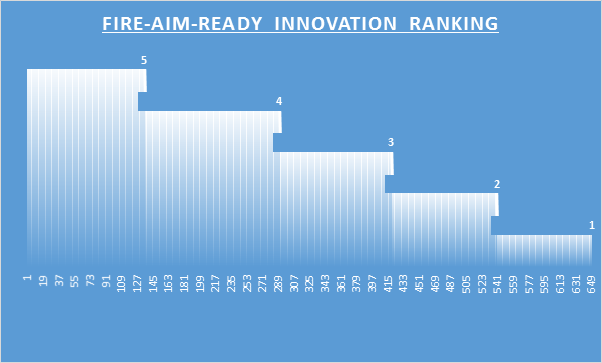 You might ask why there are only 650 companies in the dataset when we started with 1200 companies. The reason is that over the period of the study (five-years) many of the top 1200 companies were acquired, or merged with other companies to change names. Also, many others dropped out of the top 1200 companies and were no longer of interest to us. In the end only 932 companies survived (we have ignored banks, insurance and utility companies) over 5 years in their original form to be useful for a longitudinal external study of this nature. Some companies (mainly in Banking, Finance, Insurance, Utilities and other such sectors) were not of interest to us because of their opaque supply chains and highly regulated operations. At this point it is useful to also state that every company in the dataset was given a ranking based on the quintile it fell into on each of the five measures. That is why maximum possible points were 25. Full methodology is available in the source document, but the reason was that external data is rarely reliable enough to rank more accurately than that. The second measure of interest to us is the $eed-to-$tore Efficiency. This, is of course, the darling of the supply chain crowd especially those coming out of logistics background. Right product, in right place, in right quantity, at right time (there are many other Rs which people add on, but we will stay simple here) – is the catch phrase. The aim is to churn the cash faster so that more of it sticks around for longer. Consider Figure 2 below which shows profits margins on sales for 2012 for 932 companies ranked in a descending order. The names of the companies are not shown on the figure, and all we are interested in is to divide this universe of companies into five sub-universes ranked by profit margins. The highest ranked 20% of the companies get a score of 5 on $eed-to-$tore efficiency because indeed profit margins are derived from efficiencies. 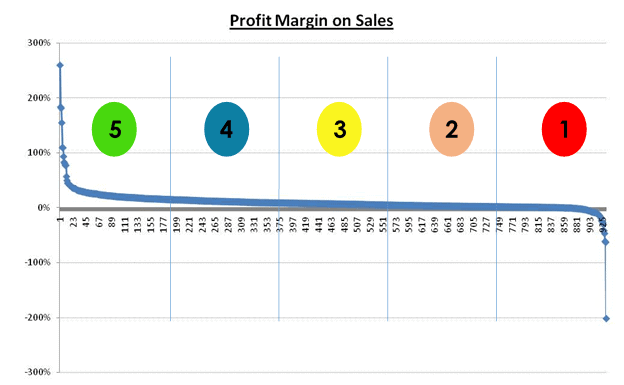 Even if in some cases, such as Amazon’s margin of 1%, where the profit margins are very low placing them lower on $eed-to-$tore efficiency measure than would be warranted from other internal variables, this deficiency will be made up in other measures such as Market Value to Profits ratio (for example in Amazon’s case it is 125 compared to the market average of 14.9). Let us see how that happens. Consider Figure 3 which shows similar detail for Market Value to Profits Ratio for the same 932 companies in a descending order. Obviously the order has changes this time and Amazon is not middle of the pack in this figure; rather it is one of the top performers. We use this measure as a proxy for Fire-Aim-Ready innovation – a variable which is notoriously very hard to define and measure. However, as a proxy, market price has built into it the expectations of future earnings coming from investment into useful and profitable innovation.

Again the proxy may not be perfect. For example Amazon is ranked one of the highest on this measure though there are other companies which might be far more innovative. However, when measured over a database of more than 1000 companies, and using rankings, rather than absolute numbers for these variables, it is possible to discernable spread of data on each of the variables of interest. Top 20% of the companies for each variable were given a score of 5, next 20% were given a score of 4 and so on, with the bottom 20% of the spread given a score of 1. In part 3 of this blog series, I will go over the remaining three pillars underpinning Supply Chain 3.0.

The Last Miles of Amazon

How SUPPLY CHAIN 3.0 Can Lead To Tangible Business Benefits (Part 6 of 6)

How companies will perform better by combining their business networks

Amazon shipping items before you order it: creepy or savvy?

Even bigger troubles with big data